6/3. Laurie Knight will join the Association of American Railroads (AAR), effective July 25, 2011. She has been the National Association of Broadcasters' (NAB) Executive Vice President of Government Relations. See, NAB release and AAR release.

6/1. Maria Pallante was named Register of Copyrights and Director of the U.S. Copyright Office. She has been the acting Register since January 1, 2011. She replaces Marybeth Peters, who retired last year after serving for 16 years as the Register. See, CO release. 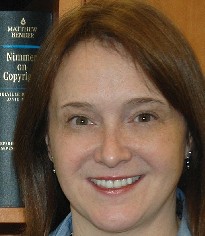 Pallante (at right) has held several senior positions at the Copyright Office over the last four years. From 1999 through 2007 she was intellectual property counsel for the Guggenheim Museums.

She has also worked for the National Writers Union (NRU), the Authors Guild (AG), and the law firm now known as Trister Ross.

Sandra Aistars, head of the Copyright Alliance, stated in a release that "Pallante will be a strong advocate for the interest of authors and creators and a fair arbiter for our nation's copyright laws".

The Motion Picture Association of America's (MPAA) Fritz Attaway applauded the selection of Pallante in a release.

The Public Knowledge (PK), a Washington DC based interest group that sometimes opposes the actions of the CO, expressed support for the selection of Pallante. Museums are an organized interest, which like other aggregators and distributors of copyright based works, supported orphan works proposals.

Sohn praised the selection of Pallante in a release, and added that "We have worked with Maria for years on a variety of issues and found her to be open and receptive to the views of stakeholders from all points of view. We look forward to working with her in her new role. We are eager specifically to work with Maria on the vexing question of orphan works, which has kept many artists, filmmakers and others from enriching their projects with source material for which the creator can’t readily be found."