3/15. The Copyright Office (CO) published a notice in the Federal Register that announces a series of hearings in Washington DC and Los Angeles regarding its triennial review of exemptions to the anticircumvention provisions § 1201.

The anti-circumvention provisions of the DMCA are codified at 17 U.S.C. § 1201, et seq. Subsection 1201(a)(1)(A) provides that "No person shall circumvent a technological measure that effectively controls access to a work protected under this title ...".

Then, § 1201(a)(2)(A) provides that "No person shall manufacture, import, offer to the public, provide, or otherwise traffic in any technology, product, service, device, component, or part thereof, that --- (A) is primarily designed or produced for the purpose of circumventing a technological measure that effectively controls access to a work protected under this title;"

Furthermore, § 1201(b)(1)(A) provides that "No person shall manufacture, import, offer to the public, provide, or otherwise traffic in any technology, product, service, device, component, or part thereof, that --- (A) is primarily designed or produced for the purpose of circumventing protection afforded by a technological measure that effectively protects a right of a copyright owner under this title in a work or a portion thereof; ..."

Then, Subsections 1201(a)(1)(B) through (E) provide for rulemaking proceedings conducted by the CO every three years to establish exemptions to the prohibition of (a)(1)(A) for certain non-infringing uses.

3/15. The Department of Justice's (DOJ) Antitrust Division published a notice in the Federal Register (FR) that announces that the Network Centric Operations Industry Consortium (NCOIC) filed a notification of a change in its membership, pursuant to the National Cooperative Research and Production Act of 1993, which pertains to limiting antitrust liability of standard setting consortia. See, FR, Vol. 77, No. 51, Thursday, March 15, at Page 15394.

3/15. The Department of Justice's (DOJ) Antitrust Division published a notice in the Federal Register (FR) that announces that the DVD Copy Control Association (DVDCCA) filed a notification of a change in its membership, pursuant to the National Cooperative Research and Production Act of 1993, which pertains to limiting antitrust liability of standard setting consortia. See, Federal Register, Vol. 77, No. 51, Thursday, March 15, at Page 15395.

3/15. The Department of Justice's (DOJ) Antitrust Division published a notice in the Federal Register (FR) that announces that the Open Mobile Alliance (OMA) filed a notification of a change in its membership, pursuant to the National Cooperative Research and Production Act of 1993, which pertains to limiting antitrust liability of standard setting consortia. See, FR, Vol. 77, No. 51, Thursday, March 15, at Pages 15395-6.

3/14. The Federal Communications Commission (FCC) released an agenda [4 pages in PDF] for its event on Wednesday, March 21, 2011, titled "open meeting".

Second, the agenda states that the FCC is scheduled to adopt a 4th Report and Order (R&O) and 3rd Order on Reconsideration (OR) "to implement a market-specific FM translator processing scheme, adopt application caps to prevent trafficking, and modify policies to expand opportunities to rebroadcast AM stations on FM translators".

Third, the agenda states that the FCC is scheduled to adopt a 5th R&O, 4th Further NPRM, and 4th OR regarding implementation of the Local Community Radio Act of 2010 (LCRA), and the low power FM (LPFM) service.

Finally, the agenda states that the FCC is scheduled to adopt a NPRM and Notiice of Inquiry (NOI) regarding "service, technical, assignment, and licensing rules for flexible terrestrial use of spectrum currently assigned to the Mobile Satellite Service (MSS) in the 2 GHz band" and "an alternative band plan involving additional spectrum at 1695-1710 MHz that the National Telecommunications and Information Administration (NTIA) has proposed to reallocate from Federal to commercial use".

3/14. Amy Levine, Senior Counsel & Legal Advisor to Federal Communications Commission (FCC) Chairman Julius Genachowski, will leave the FCC. The FCC stated in a release that Charles Mathias "will be detailed ... on an interim basis to serve as Acting Legal Advisor". He is Associate Chief of the FCC's Wireless Telecommunications Bureau (WTB). This release adds that Levine's "work includes supervising the agency’s spectrum policy and providing technical advice to Congress; managing wireless transaction reviews, including the proposed AT&T/TMobile and AT&T/Qualcomm transactions; and promoting the creation of a nationwide, interoperable public safety broadband network and deployment of E911 and NG911 technologies." 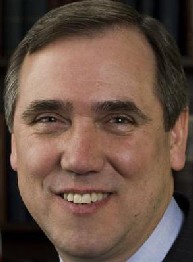 Sen. Merkley (at left) stated in a release that "The Internet has opened the doors for business growth and innovation of all kinds. The CROWDFUND Act will allow that innovation to continue by allowing small investors to pool their resources to fund promising new ventures".

His release elaborates that "Normally, when a company seeks financing from the public it must register as a security with the Securities and Exchange Commission, providing detailed disclosures. The CROWDFUND Act would provide an alternative to this process, allowing companies to raise up to $1,000,000 annually through crowdfunding on registered internet websites."

Motaavi states in its web site that it is an "integrated exchange and trading platform where any investor can invest in and trade shares of companies seeking up to $1M a year."

It adds that "Motaavi addresses two major issues. First, startups and small businesses face a funding gap which can be fatal to the company. Second, investments in startups and small businesses have previously been limited to the very wealthy as a result of antiquated regulation. Because of recent legislative initiatives, things are changing. Motaavi solves these issues by allowing anyone to invest in startups and small companies regardless of personal wealth. Companies can harness the power of crowds, and crowds can spread information and risk, creating a vibrant and powerful market."

ProFounder, another crowdfunding platform, wrote in its web site on February 12, 2012, that "the current regulatory environment prevents us from pursuing the innovations we feel would be most valuable to our customers, and we've made the decision to shut down the company."

US, Japan and EU Take Rare Earths Issue to WTO

3/13. The United States filed a complaint (nominally a request for consultations) with the World Trade Organization (WTO) against the People's Republic of China (PRC) alleging that it is imposing export restraints, export duties, and export quotas on rare earth materials (REM) in violation of its WTO commitments.

The Office of the U.S. Trade Representative (OUSTR) announced back in December of 2010 that it might take this action. See, story titled "OUSTR Is Considering Filing WTO Complaint Against PRC For Its Rare Earths Export Restraints" in TLJ Daily E-Mail Alert No. 2,189, December 29, 2010.

3/13. The Office of the U.S. Trade Representative (OUSTR) issued a release that summarizes the US allegations that that the People's Republic of China is violating its World Trade Organization (WTO) with its export restraints, duties and quotas on rare earth materials.

Ron Kirk, the USTR, stated in this release that "China continues to make its export restraints more restrictive, resulting in massive distortions and harmful disruptions in supply chains for these materials throughout the global marketplace".

The OUSTR release also alleges that the PRC "imposes harmful export duties on rare earths, tungsten, and molybdenum. China committed as part of the terms of its WTO accession to eliminate export duties for all products other than those listed in a specific annex. The export duties the United States is challenging are imposed on products not listed in that annex."

It adds that "The WTO recently confirmed in the China -- Measures Related to the Exportation of Various Raw Materials dispute that China cannot justify its imposition of such export duties pursuant to the exceptions provided in Article XX of the GATT 1994."

The OUSTR release also states that the PRC "imposes distorting export quotas on rare earths, tungsten, and molybdenum. China also imposes other export restrictions through its export procedures and requirements. Article XI:1 of the General Agreement on Tariffs and Trade 1994 (GATT 1994) generally prohibits restrictions on exports other than taxes, duties, and charges. In addition, China's WTO Accession Protocol contains broad commitments not to restrict the right to export goods."

Sen. Murkowski Assigns Some Blame for Rare Earths Problem on US Government Regulation

3/13. Sen. Lisa Murkowski (R-AK), the ranking Republican on the Senate Energy and Natural Resources Committee (SENRC), stated in a release that "The president wants to sue the Chinese for something that we could -- and should -- be producing for ourselves."

"Instead of settling for Chinese imports, the president should be taking steps to jumpstart development of our own supplies of rare earth elements and other critical minerals. All he has to do is look north to Alaska, which has already identified roughly 70 rare earth elements sites." 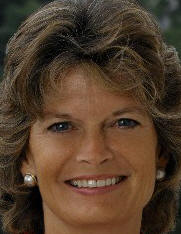 Sen. Murkowski (at right) added that "We have some of the strictest environmental standards in the world, but the president prefers to import minerals critical to our competitiveness and security from a country that has some of the lowest. If the president wants to address China's dominance in critical minerals production, he should support changes to U.S. federal minerals policy to allow domestic mining."

Sen. Murkowski has introduced legislation that would not lessen environmental standards, but would be directed at the length and complexity of obtaining federal permits to extract rare earth elements.

The SENRC has not yet marked up this bill. See also, story titled "Update on Rare Earth Materials Legislation" in TLJ Daily E-Mail Alert No. 2,261, July 17, 2011.

Sen. Murkowski also gave a speech in Washington DC on March 13 in which she addressed the "federal government's share of the blame for our rare earth supply problems".

She argued that her bills "offers us an opportunity, not just to update our mineral policies, but to ensure that our country produces its fair share of the rare earths and raw materials that make so much of our modern world possible. This is about strengthening our economy, creating jobs, attracting investment, and competing with other nations around the world."

She also states that "The U.S. has some of the strongest environmental standards in the world. Mining operations are subject to no less than 30 federal, state and local regulatory programs." And, "we should be proud of and maintain the commitment we have displayed -- over generations -- to being good stewards of our natural environment."

But, she continued, "What we should not do, however -- and particularly in the case of minerals critical to our global competitiveness and national security -- is subject mining projects to an unnecessarily long permitting process. Delaying projects, stranding capital, and allowing bureaucratic intransigence is not a strategy for environmental protection. To the contrary, it is a disingenuous and dangerous thing to do as the U.S. struggles to create private-sector jobs and attract long-term investment."