4/30. The House Judiciary Committee (HJC) released a report [17 pages in PDF] titled "The Obama Administration's Disregard of the Constitution and Rule of Law". This is a "Chairman's Report", prepared under the direction of Rep. Lamar Smith (R-TX), Chairman of the HJC.

HJC Democrats leveled similar accusations at the Department of Justice (DOJ) during the Bush administration.

All of the matters discussed in this report pertain to matters that do not implicate information and communications technology (ICT).

This report states that "Rather than fulfilling the Attorney General's oath to "support and defend the Constitution of the United States" and the President's Constitutional responsibility to "take care that the laws be faithfully executed," the Justice Department in the Obama Administration, under the leadership of Attorney General Eric H. Holder, Jr., has repeatedly put its partisan agenda ahead of its Constitutional duties."

This report adds that there is a "pattern of pushing partisan ideology rather than neutrally enforcing the law", and that this DOJ has "disregard for Congressional oversight and contempt for judicial review".

There is an argument to be made that the the DOJ under the leadership of Eric Holder has failed to defend the 4th Amendment rights of citizens against infringements by federal law enforcement agencies in the context of new ICT, and that the DOJ has failed to take care that the surveillance statutes have been faithfully executed. However, on these issues, Rep. Smith and AG Holder are in agreement. Hence, the just released report is silent on this subject.

Title I of the bill pertains to cyber security research and development, and education.

Title II of the bill pertains to federal cyber security standards. It requires that the National Institute of Standards and Technology (NIST) shall "ensure coordination of Federal agencies engaged in the development of international technical standards related to information system security" and write for the Congress "a plan for ensuring such Federal agency coordination".

This bill revises the Networking and Information Technology Research and Development (NITRD) program.

Rep. Hall (at right) stated in the House that "This program is an important component of our Nation's cybersecurity efforts, and it is critical to our overall networking and information technology research and development in general. It's a product of the High-Performance Computing Act of 1991 and represents and coordinates the Federal Government's nearly $4 billion R&D investment in unclassified networking, computing, software, cybersecurity, and related information technologies."

He continued that "The bill before us today updates the underlying high-performance computing statute that has been in place for 20 years and codifies the work the National Coordination Office already undertakes."

4/27. Sen. Charles Grassley (R-IA) ended his holds on the nominations of Jessica Rosenworcel and Ajit Pai to be Commissioners of the Federal Communications Commission (FCC).

The Senate did not meet on April 27. It is in recess the week of April 30 through May 4. It could confirm these two nominees as early as May 7.

Sen. Grassley placed these holds, not in objection to the nominees, but because of the FCC's handling of the LightSquared matter, and its refusal to provide him information.

Sen. Grassley (at right) stated in a release that "Exactly one year ago today, I wrote my first letter to the FCC on LightSquared. At that time, headlines were describing interference concerns between LightSquared and Global Positioning System devices. LightSquared’s primary backer was in the news over having attracted the Securities and Exchange Commission’s attention. I wondered why the FCC had given expedited preliminary approval to a project led by someone under SEC investigation and with seemingly serious interference concerns. I began seeking the FCC’s insight into its decision-making on this project. The agency turned out to be among the least responsive I’ve ever come across in 30 years of conducting constitutional oversight of the executive branch of government."

Sen. Grassley continued that "As I began my investigation, facts came to light that raised more questions about the FCC’s actions. E-mails showed that LightSquared’s CEO sought meetings with the White House while mentioning attendance at fundraisers for President Obama. Then, news reports showed the White House pressured a four-star general to downplay the threat LightSquared posed to GPS."

Sen. John Rockefeller (D-WV) stated in a release that "I am glad that the unreasonable hold against two qualified and smart FCC nominees, Jessica Rosenworcel and Ajit Pai, has been lifted. They are each ready to do this tough job and I especially want to thank Leaders McConnell and Reid for working cooperatively to advance these nominations in the face of stubborn delay tactics. That type of bipartisan cooperation bodes well for the success of Rosenworcel and Pai and I am anxious for the full Senate to vote on their nominations in May."

Amendment by Amendment Summary of House Consideration of CISPA

4/26. The following is a summary of the House consideration of HR 3523 [LOC | WW], the "Cyber Intelligence Sharing and Protection Act of 2011" or "CISPA", a bill that would incent cyber threat information sharing, and surveillance activities.

The House approved the rule for consideration of the bill passed by the House Rules Committee (HRC) on April 25. The House then began with the base bill [18 pages in PDF] made in order by the HRC rule.

The House rejected an amendment offered by Rep. Laura Richardson (D-CA) by voice voice. It would have provided, with respect to information sharing, that nothing in the bill shall be construed to "prohibit a department or agency of the Federal Government from providing cyber threat information to owners and operators of critical infrastructure".

The House rejected an amendment offered by Rep. Jim Langevin (D-RI) by a vote of 167-243. See, Roll Call No. 184. It would have changed certain references in the bill to "utilities" to "critical infrastructure owners and operators".

The House approved an amendment offered by Rep. Mike Rogers (R-MI) regarding Freedom of Information Act (FOIA) requests by a vote of 412-0. See, Roll Call No. 185.

Rep. Rogers is the lead sponsor of the bill, and Chairman of the House Intelligence Committee (HIC).

The House approved an amendment offered by Rep. Ben Quayle (R-AZ) regarding what use the government can make of information shared under this bill. The House approved it by a vote of 410-3. See, Roll Call No. 186.

The base bill provided that "The Federal Government may use cyber threat information shared with the Federal Government in accordance with subsection (b) for any lawful purpose only if -- (A) the use of such information is not for a regulatory purpose; and (B) at least one significant purpose of the use of such information is -- (i) a cybersecurity purpose; or (ii) the protection of the national security of the United States."

The bill as revised by the Quayle amendment provides that "The Federal Government may use cyber threat information shared with the Federal Government ... for cybersecurity purposes ... for the investigation and prosecution of cybersecurity crimes ... to protect the national security" and to investigate and prosecute a wide range of crimes, including pornography crimes.

Rep. Quayle stated that "Contrary to claims that this legislation puts the privacy of Americans at risk, it strengthens privacy protections by fortifying our defenses against foreign hackers who seek to exploit our security vulnerabilities and steal data and secrets. That is especially the case since my efforts to strengthen privacy provisions succeeded." See, Rep. Quayle's release.

This is an inartfully drafted amendment. It does not explain the meaning of the phrase "The Federal Government may not use".

It contains several changes of little consequence. For example, it provides that "The Federal Government may" -- not shall -- "undertake reasonable efforts to limit the impact on privacy and civil liberties of the sharing of cyber threat information".

The House approved an amendment offered by Rep. Bob Goodlatte (R-VA) that tightens several definitions to limit what information can be shared. The House passed it by a vote of 414-1. See, Roll Call No. 189. 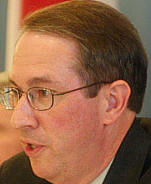 Rep. Goodlatte (at right) stated in the House that "this amendment carefully narrows the definitions of the key terms in the bill -- cyber threat information, cyber threat intelligence, cybersecurity purposes, and cybersecurity systems and adds in three new definitions from existing law. Together, these new definitions ensure that companies in the private sector can protect themselves against very real cyber threats. At the same time, they limit what information the private sector can identify, obtain, and share with others." See, video [You Tube].

But, it would not include "information pertaining to efforts to gain unauthorized access to a system or network of a government or private entity that solely involve violations of consumer terms of service or consumer licensing agreements and do not otherwise constitute unauthorized access".

Rep. Lofgren cast the only vote against.

The House approved an amendment offered by Rep. Mulvaney that would sunset the provisions of the bill after five years by a vote of 413-3. See, Roll Call No.190.

However, many of the most important decisions were made by the House Rules Committee (HRC), which adopted a rule [PDF] for consideration of the bill which did not allow certain key amendments to be offered on the floor. See, story titled "Sponsors Agree to Some Amendments to CISPA" in TLJ Daily E-Mail Alert No. 2,379, April 24, 2012.

This bill revises the Federal Information Security Management Act of 2002, which is also known as FISMA.

Rep. Darrell Issa (R-CA) and Rep. Elijah Cummings (D-MD) introduced this bill on March 26, 2012. The House Oversight and Government Reform Committee (HOGRC) amended and approved it on April 18, 2012. See, Rep. Issa's amendment in the nature of a substitute [26 pages in PDF].

This bill states that the FISMA provides "a comprehensive framework for ensuring the effectiveness of information security controls over information resources that support Federal operations and assets".

4/26. Rep. Cliff Stearns (R-FL) and Rep. Doris Matsui (D-CA) introduced HR 4817 [LOC | WW], the "Efficient Use of Government Spectrum Act", a bill that require that the Federal Communications Commission (FCC) to pair the 1755-1780 MHz block and the 2155-2180 MHz block, which is already set for auction, for reallocation and auction for commercial wireless use. See, full story.

Rep. Eshoo reiterated this request in a speech on April 26 at a conference in Washington DC hosted by the Computer and Communications Industry Association (CCIA).

The Senate Judiciary Committee (SJC) held a hearing on these proposed transactions on March 21, 2012. See, SJC web page with hyperlinks to opening statements, prepared testimony of witnesses, and video.

Rep. Waxman and Rep. Eshoo wrote that "Verizon argues that the acquisition of AWS licenses will create consumer benefits resulting from the deployment of an allocated but unused block of spectrum and the convenience of purchasing bundled communications services. In contrast, opponents assert a number of potential harms from the Verizon and cable company transactions, including further concentration in the wireless industry and disincentives for competition between wireline and wireless broadband." (Footnotes omitted.)

They continued that "These transactions have potential implications for competition in the wireless industry. Regional carriers continue to report difficulty reaching roaming agreements with national carriers and assert these transactions will further consolidate Verizon’s market power over roaming agreements. Small and regional carriers also argue that a lack of access to interoperable wireless devices in the lower 700 MHz bands has hindered their deployment of 4G wireless service." (Footnotes omitted.)

4/26. The Senate confirmed David Guaderrama to be a Judge of the U.S. District Court for the Western District of Texas. See, Congressional Record, April 26, 2012, at Page S2889.

4/26. The Senate Judiciary Committee (SJC) held an executive business meeting at which it approved the nomination Michael Shea to be United States District Judge for the District of Connecticut by a vote of 15-3.

4/26. The Senate Judiciary Committee (SJC) held an executive business meeting at which it approved the nomination Gonzalo Curiel to be United States District Judge for the Southern District of California by voice vote.

4/26. The Senate Judiciary Committee (SJC) held an executive business meeting at which it approved the nomination Robert Shelby to be United States District Judge for the District of Utah by voice vote.